'Matrix day one' is a tribute opening title sequence.

In the 20th anniversary since 'The Matrix' release, I created an opening title for the first film of the franchise, as a tribute to its creators and as a creative exercise for me. I don't intend to profit from any of these creations.
My work transitions into the original opening sequence around 1:40 min.

I wrote down a super short script, then started sketching a rough storyboard. I wanted to have an idea of the framing but I didn't want to decide already on the objects and props, as I wanted to see what was working best with the Redshift lighting, so I left the drawings quite unfinished. 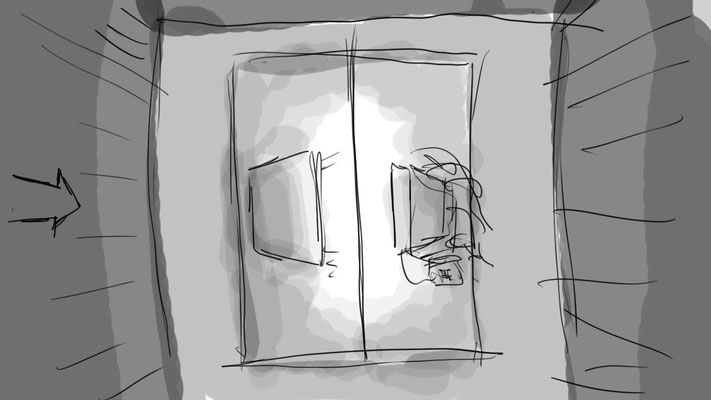 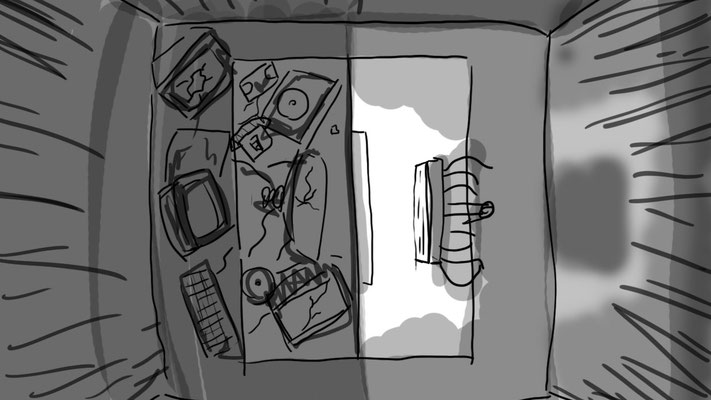 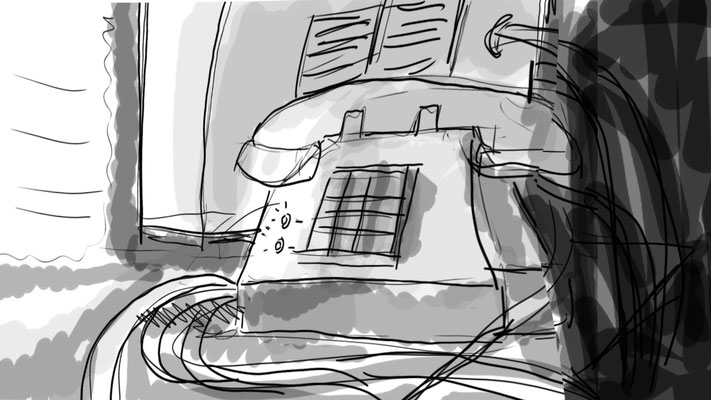 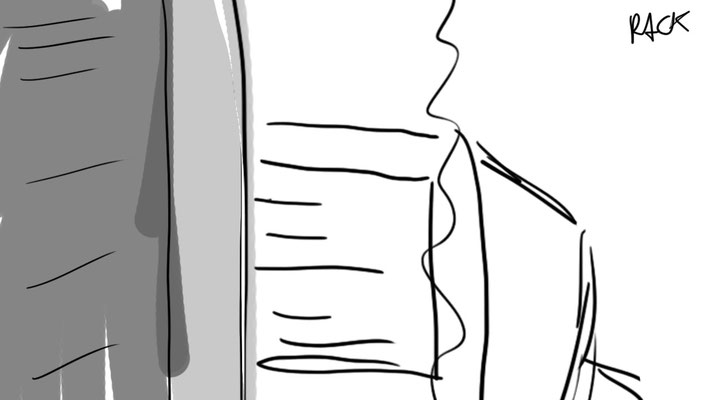 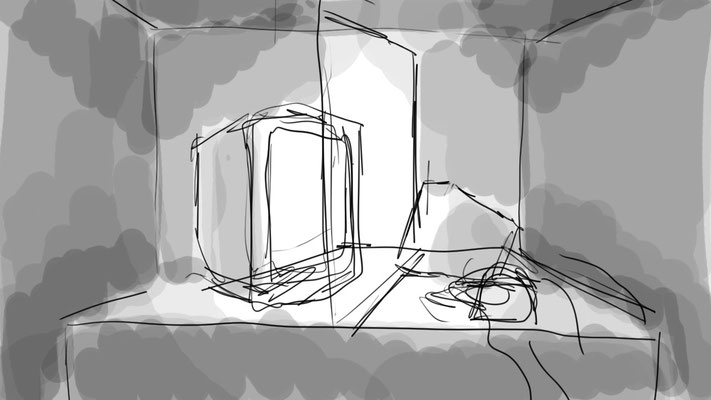 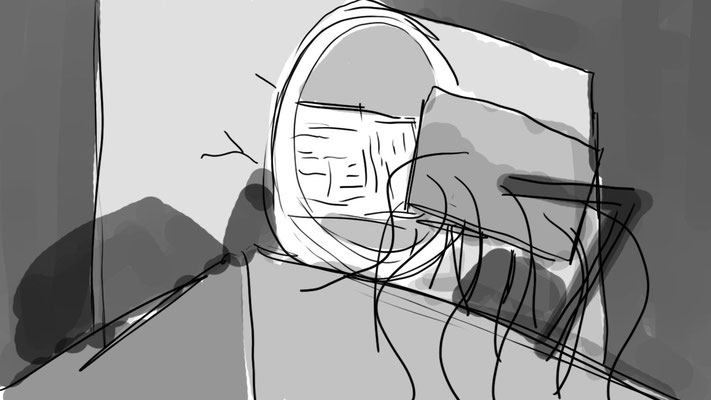 I put together a rough animatic, to get an idea of the timing of each shot and the title card, along with some sound track options. I wanted to keep it simple yet effective, trying to have the titles as the main focus of the sequence.
Then I started populating the 3d scene with objects to match the arrangement I had in mind when sketching.

I wanted to give an authentic feeling, so the scene was created only with technology that was available in the year 1999.

The camera movements were locked before the texturing, to make sure I didn't obsess with texturing details.
Here are some shots that didn't make the cut.

The content for the TV and the PC screen, had to be created along the 3d, since I wanted them to cast a real light into the scene, not to simply add them in compositing. I also created two different types of diode layers, one that was RGB for the TV and one monochrome in hexagonal pattern for the PC, to match the tecnnology of each cathodic tube. 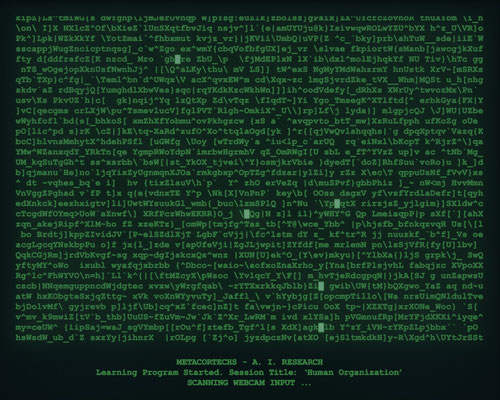 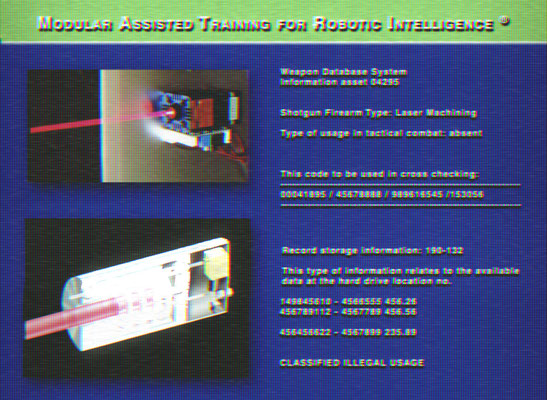 I used Creative Commons images and footage, and many free models from Turbosquid and Archive3D, as modeling everything from scratch would have been too time consuming.
The office room had to be a realistic setting, so the equations on the whiteboard are actual machine learning algorythms and the Metacortechs font (the fictional software company where Neo works) is the same we see in the movie.
I also wanted to pay a tribute to the late Gloria Foster, and I imagined her being the mother of one of the employees.

As I was developing the scenes I matched closely the look of the movie, especially the sequences in Neo's apartment and in Metacortechs' offices. The lighting of the scene took a long time, as I wanted to have focus on a few key objects while giving the feeling of a busy and messy room. I spent a good deal of time refining the textures and the renders.

How was the day one of the Matrix? How did it come to be?
An unassuming office, one of the many doors in the research centre of a big software corporation.
An experiment is running overnight, unattended, something about a prototype artificial intelligence trained to understand its surroundings via webcam.
Cables everywhere, humming servers, a computer is facing a TV that plays a constant feed of images about the human life, almost like a brainwashing session.
We see the details of the people who work there, now gone for the day: a note from a mother, some corporate notes, a bunch of keys, books, memories... all in the range of sight of this computer being trained to see everything, hear everything.
Suddenly something happens, the machine overrides its training program and develops its own language, its own world. The machine shapes its own digital reality based on the objects and faces in its sight.

As we witness this transformation, we get closer and closer until we're part of it too, the code is filling up the monitor and our screen too, it's too late to stop it, now: the AI is taking over the whole system and it will override every system, everywhere, as Morpheus describes later in the movie. The Matrix is born.

The hit song that you hear under Morpheus' speech about the nature of Matrix is Rob Dougan's "Clubbed to death".
It contains a few samples of the Edgar Elgar Theme from the Enigma Variations.
I decided to use an orchestral version of this song as it was a fitting metaphor: this music is a portion of something that later in the film evolves into something darker and more complex.

The famous typeface in the "raining code" has never been officially released. Simon Whiteley, the production designer that created the effect, initially copied some of the characters by hand from one of his wife's Japanese cookbook, then Justen Marshall digitized and animated them.
While I was researching a way to re-create the character as closely as possible to the "rain code", I noticed that some characters, especially numbers and non-katakana glyphs, were strikingly similar to the Chicago typeface, that was very popular in the 90's (it's used in the first generation of iPods).

I had the feeling that if I could find a Japanese version of a Chicago font, I was close enough to what I needed.
I downloaded some free japanese typefaces, modified them and then combined the best characters in a unicode font made from scratch, keeping the Chicago as a reference for the width, the thickness of the glyphs and the serifs.
Then I re-created the famous rain effect, to match the first frames of the movie. I wanted to have a seamless transition.
After a few versions, I eventually had a good font/animation combo that was consistent and that worked well with the original.

At this point I realized that Chicago would have been a good choice to portray the main titles, as if the Chicago is the pre-encryption version of the Japanese typeface we see in the rain code, quite fitting for the prologue this title sequence portrays.

Left: my version - Right: the original

It's been mainly an exercise for me, I wanted to practice the process of creating a title sequence, and by doing so I wanted to honour a great cinematic masterpiece.
By no means I imply that the amazing work by Richard Greenberg for the opening sequence was not enough, quite the opposite in fact, as I left it basically as it is  and created a prologue to it.
It's been a great way to practice my skills by celebrating the Matrix franchise, especially in the 20th anniversary since the first release. I don't intend to profit from any of these creations.

All trademarks, logos, images and music belong to their respective owners.